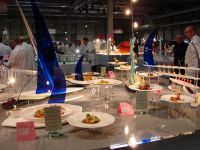 With every attention to detail covered, we worked side by side with The British Culinary Olympic team to create their displays on which their culinary masterpeices were to be shown and judged. With Oxygen’s highly skilled team we were able to iliminate any presentation concerns or issues, allowing the British Culinary Olympic team to focus all their time and energy on creating their feasts. The highly talented team (seniors and juniors) won 35 medals in all, a marvellous acheivement.